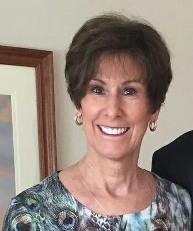 Carol Shea is a friend of Bayshore Home Care and a senior that is not only inspiring but lives to be inspired herself. Carol is one of those people that come across professional yet very warm. She is organized, prepared, well presented, and has a huge heart! As you talk to Carol and get to know her a bit you also begin to enjoy her wonderful sense of humor; almost every encounter includes laughter!

As she shared much of her lifelong memories, she recalled being a teenager when her Dad was being transferred to Berlin, Germany. All the family had their shots and were ready to go and at the last minute the family wasn’t able to go because the Berlin Wall was erected. How fascinating?! She wondered how things would have turned out if she had moved to Berlin but at the same time was grateful they ended up not moving.

At 45 years old Carol went back to school and received her Liberal Arts Degree at the University of Kansas. When asked why she decided to go back to school at that age she said she wanted to improve her mind and expand her horizons. She even took 16 hours of Italian! Carol said she learned so much in college and she really enjoyed it.

Today, Carol volunteers in ministries that are near and dear to her heart. She has served communion to the sick and homebound for many years as part of the Visitation Ministry of her church. It’s easy to understand why people enjoy her visits, not only for communion, but for her companionship and friendship. She has donated to a safe home and volunteered for an organization providing assistance for those involved in domestic violence. She also volunteers at the Susan Cheek Breast Center ministering to those battling breast cancer.

Carol’s involvement at the Breast Center came shortly after her own battle with breast cancer. In fact, it was her surgeon’s recommendation that she volunteer to help others going through the battle. The journey can be overwhelming, frightening and often times people don’t know what questions to ask or what to do. Carol helps them through the journey. She is able to share her experience and assist them in navigating through the emotional challenges as well as what questions to ask and steps to take.

It was fascinating to hear how Carol has used every experience in her life to build upon. In fact, she has served as Power of Attorney for some very close friends to ensure they received the proper care during critical times of their lives. It was never her goal to be someone’s Power of Attorney, but she has used the experience to offer direction and guidance to those facing similar circumstances.

Carol has a servant’s heart! In fact, in 2015 she received a prestigious award from the Diocese of St. Petersburg. Carol was awarded the St. Jude the Apostle Medal! Each year the medal is given to men and women who show distinguished and outstanding service to their parish. Carol truly believes she is doing what she was meant to do! Carol said she is blessed by being with those she serves more than she blesses them. She is inspired by the bravery of a number of them and how they have faced the end of their life. Recently, she has been inspired by her nephew who was in a tragic accident and has already accomplished more than the doctors predicted in his recovery. His determination and faith has been an incredible example!

When Carol is not volunteering she loves to travel. She has been to Africa, Europe, and will be visiting several countries this year! As she recounted the trip to Africa and described sleeping in a tent, it was evident she has an adventurous side!

Several years ago Carol decided to face her fears of heights and water. On separate occasions she went skydiving and ‘snuba’ diving. She said both were fabulous! She is quite the adventurous one!

When asked if she had any regrets, Carol said absolutely, yes! She said none come to mind and she likes to stay focused on the positive! One thing popped in her head; she wishes she had pursued photography; she’s pretty good at it. For now, it will continue to be one of her hobbies.

What could we, the next generation, learn from Carol? Carol suggested we put the cell phone down, look at one another and communicate! Look into someone’s eyes while talking and truly listen. She said the eyes are the window to the soul.
She also said it’s not too early to be kind to someone else. Just do something nice for someone. It doesn’t have to have any fanfare, it can be low key. Just do it! She said just like the movie Pay It Forward…

Carol said she loves the opportunity she has been afforded through the wonderful people in her life to live where she lives, to travel, and to do what she does; “it’s all of them who make me who I am”.

From the Senior Care Blog